Today's entry is one of my favourite projects from my college years. The assignment was to choose a topic and create four illustrations -- one each in the styles of two illustrators and two fine artists. I think I'd just recently seen a bunch of the Universal films and most definitely was already in love with the Invisible Man and the Creature from the Black Lagoon. So my topic was the Universal Horror monsters. And because I loved comics I opted for two comic book artists as my illustrators. 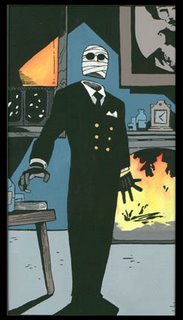 Mike Mignola, the creator of Hellboy, had just worked on the Dracula movie adaptation (based on the Coppola movie...I own a page of his art from that series). The Invisible Man is my attempt at Mignola's style rendered in goauche. I really wanted to re-create the scene of the Invisible Man standing in front of the window in his rented room. Una O'Connor is fussing around him, procrastinating so she can get a better look at him. At the time I lacked the ability to work out the perspective properly to really do the scene right. 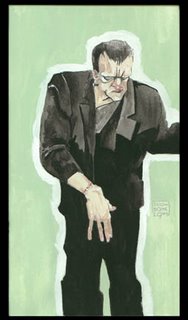 Frankentstein's monster is done through the style of Egon Schiele (the white outline and hand touching himself are two things I took from Schiele). I don't think the face on the monster turned out all that well but even years later I love how the hand looks. Look up Egon Schiele to see some real art! 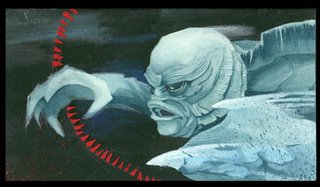 Bill Sienkiewicz (no, I didn't look up the spelling) illustrated a comic book version of Moby Dick. It has lots of gorgeous water colour painting and underwater ghostly images of the Whale. I wanted my Creature to look like Bill's paintings but lacked the ability to really paint in water colour. 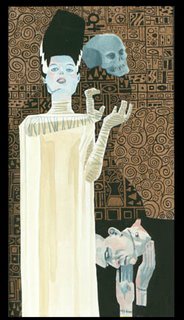 The Bride of the Monster is done in the style (and I think directly ripped off composition) of a Gustav Klimt painting. All that gold and the pose of the Monster are definitely Klimt. In a way this is also another Mike Mignola piece because Mike used the same Klimt painting I based this on in a page of Ironwolf.

Halloween's coming up quick...hope you've all got your costumes worked out. I know I haven't.

You art-school star, you.

These are great!. Ditto on the Austrian Seccessionist inspired ones.