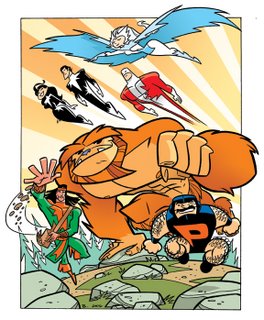 Todays entry is in part inspired by Jay Stephens' contribution to Project Rooftop! I love that Jay made the Shaman into more of an Indian totem than just a man in tights. Very cool!

I've been wanting to draw Alpha Flight in an animated-ey style for a few months now...in fact it's been on my "To Do" list since December of last year! That drawing of Jay's was just the kick in the seat of the pants that I needed to get something done. This is not a re-design in the vein of Project Rooftop...although I am thinking it'd be fun.

Naturally, I've been re-reading all of my Alpha Flights since I started drawing this...and it struck me as odd that John Byrne spent TEN whole issues establishing the individual character's in their own issues as well as back-up stories before he got them together as a team just to KILL one of them (I won't say who because there may yet be a "new reader" out there :)

Yes, they teamed up in the very first issue and were still sort of together by issue two...but the stories quickly turned into non-team comics. Not that I mind, actually. I think if I'd been a reader back when the issues had come out I'd have probably skipped the issues with Northstar and Aurora...too much talking! I LOVE the two issues with Sasquatch fighting the Super Skrull! I think Byrne must have loved that Super Skrull because he used him again to re-vive Iron Fist in the pages of Namor!

I'll sign off now before this becomes a comic book review blog!

Here's some work that I wish I could have done more with (and maybe there's still a chance...but I doubt it). My buddy Brian and I worked up a pitch for DC called DC University! All of the DC heroes would appear in their civilian identities, would have their powers but wouldn't be "Wonder Woman" or "Superman" as we know them now. Definitely NOT in continuity! :) 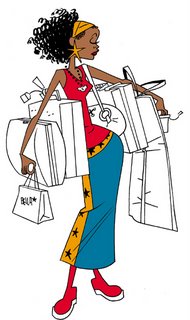 This was my Diana Prince on moving day! I imagine she drove up in her invisible hybrid! 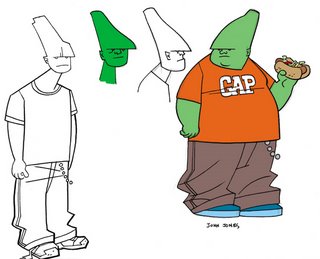 John Jones (aka The Martian Manhunter) was imagined as a husky lad! I don't remember why, really...I think the idea was that he'd come to Earth and fallen in love with pop culture, junk food and television and just got a little soft around the middle. It would be a few years before he realized his shape shifting abilities could do away with that extra weight in seconds. Much faster than the ab-sizer or the sauna belt! 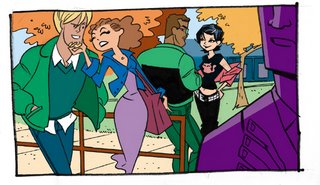 Oliver Queen (Green Arrow)...um whatever the Black Canary's real name is, John Stewart (Green Lantern) formed a sort of love triangle. John secretly had a thing for Canary who was going steady with Ollie. The girl in the black T is Selina Kyle!

Darwyn Cooke had just redesigned a new Selina Kyle and I clearly used his haircut for her in my version. Typically dressed in black I thought it would be cute that she accents with pink since she's the least likely to be a girly-girl!

I wonder if re-designs have to be attributed to the proper copyright? In any case the names all belong to DC comics and its Time Warner conglomerate!