A nice, short review from Rachelle over at Living Between Wednesdays

J.Bone not only did the cover for this issue, he did the interiors! Yay!It's Superman's birthday and everything is adorable, from Lex Luthor being cranky about not being invited to the party, to Batman explaining pinatas to the readers

Story - 2: Quoting Myra in a script by David Odell "Jeez, they're really scraping the bottom of the barrel these days!" Lex Luthor, the greatest criminal mastermind of our time is jealous of a birthday party? This is just Dora & Diego in capes isn't it? I appreciate them trying to filter the Lex/Superman dynamic down to the base level for children, but even they wouldn't buy a story like this.

Art - 3: Ugh, the constant smiling makes you think Colgate should be paying for advertising, even more than Mattel for enforcing this book's existence! It's just not fun anymore, it was nice to see the character designs for other Superman villains but everything just seems so 'cookie cutter'.


Cover Art - 4: Superman takes centre stage in this book for once!... Hey, is that ME in the bottom corner... ooh I'm famous! Joking aside it's a nice fun, family friendly cover - where the heck is my slice of that gigantic cake??

The art is "Ugh!" Really? Adam apparently doesn't like smiling or cookies. I think somebody needs a hug. Super bonus points for quoting from Supergirl, though.

Here's another review. This time by Doug Zawisza for Comic Book Resources!

This Johnny DC title does what no title in the DC Unverse proper did this year –- it wishes Superman a happy birthday. After all, it's not every day that a globally recognized, American legend turns 70. To celebrate, a Superman museum is opened in the Johnny DCU, much to the lament of the Flash.


Fisch provides a serviceable title, easily approachable for younger readers with just enough nods and winks for the older crowd that is trying to help foster comics reading for those newer comics fans. The art is simplistic, but well crafted, as it replicates the chunky feel of the toy line these heroes are based upon.
Lex Luthor, of course, shows his bald head to ruin the affairs of the day, with a mischievous plan that smacks of the types of schemes he used to cook up in the Superman stories of the 1960s.


In a time when Superman seems to be encountering a great deal of strife, a title like this does provide a nice reminder that comics were once geared towards a less stressed-out readership. The fact that it includes a recognition and celebration of Superman's birthday with his best friends and his dearest family members only adds sweeter frosting to the birthday cake.

A "less stressed-out readership"! I like that. I really do read this book every month...okay, it's my job. I read the scripts in order to work up a cover idea. But I would be reading this series anyway because I think Sholly is doing such a great job of updating the old World's Finest, Superman Family and Justice League type stories from the 60's. You know, when Batman used to smile and villains were foiled by Green Lantern wearing a rubber Superman mask! When Mxyzptlk and Bat-Mite were just imps causing mischief not bizarre dwarfish demons tearing up the Universe with death-hungry powers. 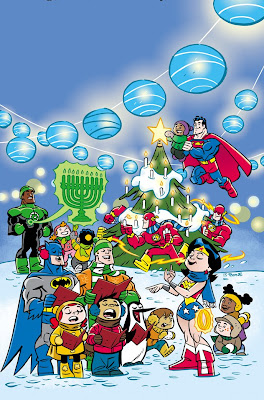 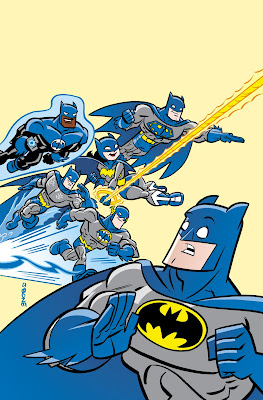 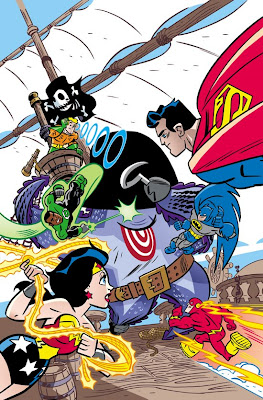 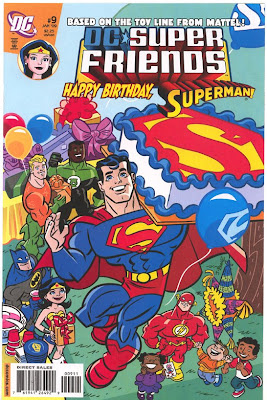 Wednesday the 18th of November is the day Issue #9 of the Super Friends hits the stands. This is the issue with Superman's birthday celebration, the first appearance of the Super Friends' Super Baby and the first issue where I draw the interior art (as well as the cover).
I loved drawing the interiors for this issue. Sholly Fisch wrote a super fun story and I had a super fun time with it.

One of my favourite parts was the Superman Museum and Hall of Villains because I got to draw a few of Superman's greatest Foes. 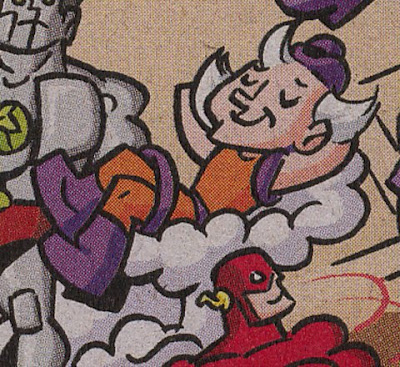 Mxyzptlk turned out to be my favourite of all the favourite parts about this story. He only appears as a statue, which is a darn shame. Maybe I'll get to draw him again for another story.
If you've got a comic shop near you, and you feel the inclination, pop in and take a gander at this issue. Let me know what you thought!
Also, the dear sweet Nicole at Pageslap blogged about me and my odd new hobby! I started a new blog dedicated to my Amigurumi! Amigurumi is a fancy Japanese word that means "crochet dolls". Yup, I crochet. And I make dolls. Superhero dolls. Check 'em out at my new blog, Skein and Bones.
best,
j.
Posted by j. at 3:19 PM 8 comments: