Challenge of the Super Friends! 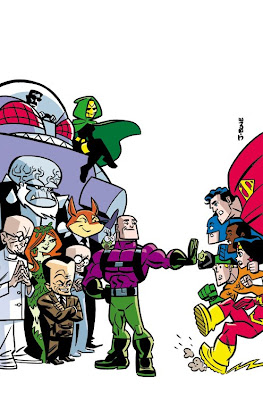 Super Friends #24 marks my two year anniversary as cover artist on this most excellent book! I asked if I could draw the interiors for that reason. I also wanted to draw the guts because Sholly had, once again, written a super fun story. So many super villains, so many characters I'd never even heard of but wanted to draw. Along with the mad scientists I was drawing wolf-men, monster-men, some winged dog creatures (I can't find my script to look up what they're called...Zombgiza? Zombizi? Something like that), robots, sharks and a whole bunch of other fun stuff!

Over at Comic Book Resources the fine Jeffrey Renaud interviewed me about my work on the Super Friends. Click me!

On a semi-related note I've been watching YouTube videos of Superfriends cartoons past...the old Filmation series in particular. I only ever saw the Aquaman cartoons and had never seen the Flash or Hawkman episodes. Boy, are they ever dumb! :) In an enjoyable fashion, yes! I don't know who wrote that stuff but it is awesomely stupid! I love it!

Oh, and I've also been watching the Plastic Man cartoon on DVD! I loved that cartoon as a kid and still love it today. Again...writing ain't so great. But who cares. I love a cartoon with a laugh track. It's so perfectly absurd! 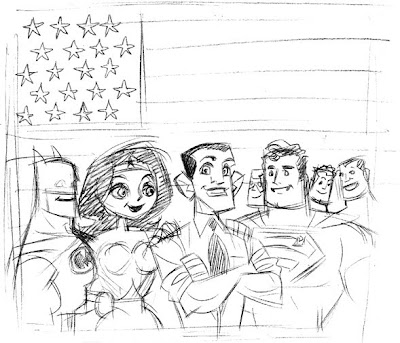 First up is an older sketch, drawn last year when old man Obama won his wayinto the White House and into the hearts of Americans and Canadians alike. Now, I hear he's not doing so well. He hasn't done enough in a year, hasn't fulfilled all of his promises, etc... I won't go gettin' all political but I always figure let's give a guy a chance. I've done a lot of work by 'committee' and it is not at all easy to deal with everyone's opinions/notes/demands and all I'm doing is drawing a kid sitting in a classroom (for example)! This guy's trying to run a country! 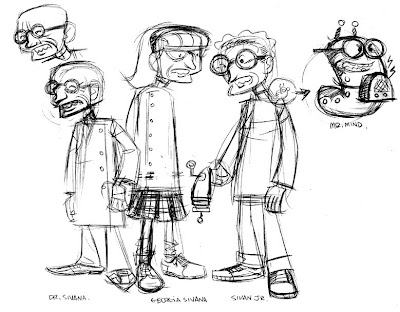 All right - onto the mad scientists. I sketched all of these guys for an upcoming project (I'm sure you'll figure it out by the end). A lot of these characters I had never even heard of but kinda grew fond of 'em after a month of drawing them. The Sivanas - I knew them from Shazam comics. I never really noticed the overbite and squinty eyes before. Was Dr. Sivana supposed to be a caricature of an Asian stereotype? I try to be hyper-aware of cliched portrayals of race so I toned down the buck toothedness in this family as I drew them. Just in case! 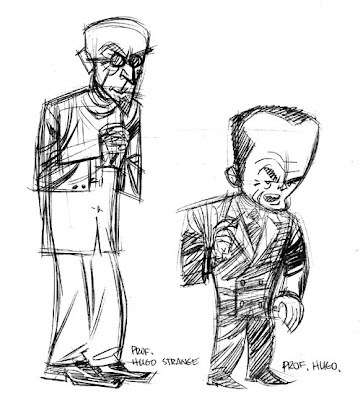 Hugo Strange I knew but not Prof. Hugo! I loved drawing Prof. Hugo's gigantic head on his wee body. He shows up an awful lot in the book...er, project. 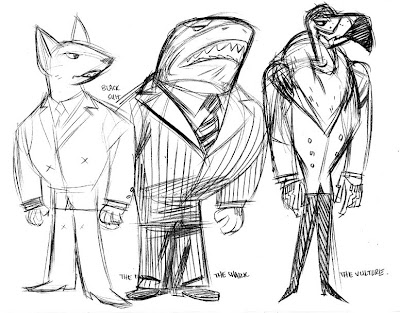 Okay, never heard of these guys but they were by far my favorite to draw! The Fox, The Shark and The Vulture! How amazing are these guys that they're mad scientists. I don't even know what they did that was so science-y but just the very fact that I got to draw talking animals was enough to make me just mad (as in "in love") with these guys! 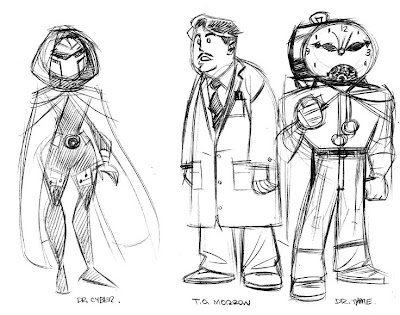 Dr. Cyber - never heard of her. But she showed up in an episode of Justice League at some point and had, therefore, been given a Bruce Timm design. Easy enough to translate that.
Dr. T.O. Morrow - Inventor of the Red Tornado. I know him from my Super Powers Red Tornado toy packaging. A villain creating a Hero? How is that even possible?
Dr. Tyme - Old clock head! I basically just went with his original look, mixed with the Batman: Brave and the Bold cartoon version of the Clock King. I wonder which one came first? 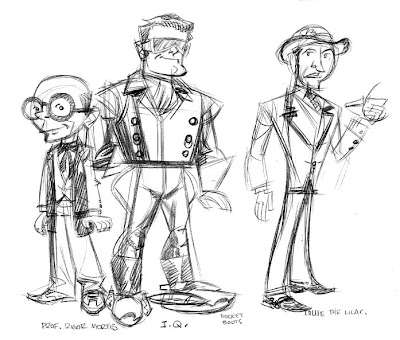 Prof. Rigor Mortis, I.Q. and Louie the Lilac. First two both had a fun look I played with a little. Louie - the only reference I had for him was a photo from the old Adam West Batman tv show. Did he ever appear in a comic? I dunno! So I tried to work the actor, Milton Berle, into his look. I don't know that I was successful but I dug his ski-slope nose and spats. 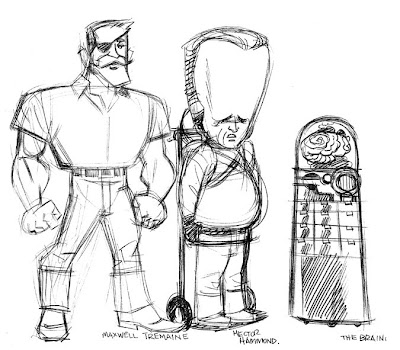 Maxwell Tremaine seems more like a villainous hunter than a mad scientist. I imagine him running the island I read about in "The Most Dangerous Game". A story I first read in high school. Love the eye patch!
Hector Hammond apparently can't move. He uses his villainous mind powers to commit evil acts. Because he's immobile, and his first name rhymes with (Hannibal) Lecter, I drew him strapped to a dolly. In the actual issue he's been given a Segway...I figure that way he can get around on his own, using the power of his mind to control the personal mobile unit.
The Brain is a favorite Doom Patrol villain. He's supposed to be in a jar carried around by Monsieur Mallah (an intelligent gorilla). But, I couldn't resist sticking him in a mechanical body you might see in an episode of, oh I don't know...Dr. Who! 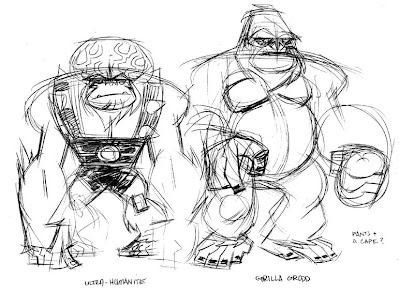 The gorilla brainiacs! Ultra-Humanite and Gorilla Grodd. Grodd has already appeared in an issue of the Super Friends...not that that has anything to do with my reason for drawing all of these characters. Not at all.
Moving on...the Ultra-Humanite, like Dr. Cyber, had a Bruce Timm-ed version from his appearance in the Justice League. I went with it but tried to give him something a little extra and used him often in backgrounds throughout the issue.

These guys are all scientists in the DC Universe? No wonder it's all screwed up :)