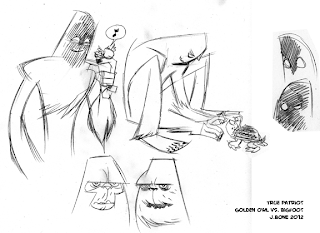 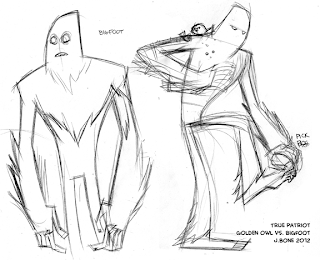 A bunch of Canadians are raising funds for TRUE PATRIOT, a Canadian Superhero book project and we need your help! Although the stories are about Canadian superheroes the stories are universal! Galactic, even! COSMOLOGICAL!! It's gonna be good.

My story is The Golden Owl vs. Bigfoot! I've been sketching up ol' squatchie, trying to make him all mysterious and friendly/creepy! I'm looking forward to drawing the story and to seeing the other stories being put together by the super talented artists involved in the book. So check out the link above and see if there are any perks you'd dig and help us reach our goal of $10,000 this weekend. We're only days away from the end of the campaign and want to make this happen for YOU!

Thanking you in advance. 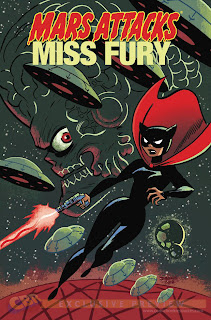 This past weekend was New York Comic Con, with many projects announced. One I'm going to be keepin an eye on (just for all the pre-publication hoopla surrounding it) is SUPERIOR SPIDER-MAN by Dan Slott and crew. Spidey's my favourite superhero ever but I long ago let go of any "ownership" of what happened to him. Sometimes he's in something I like, sometimes not. That's comics!
Anyway, an announcement I was part of was IDW's news that in 2013 the popular MARS ATTACKS license will invade several of their books. I was asked to draw a variant cover with MARS ATTACKS MISS FURY. Though I'd seen Miss Fury before I'm not all that familiar with the character. Basically she looks like Catwoman in a cape. And in fact her costume is made of black leopardskin. Fuzzy.
I nabbed that cover image from the CBR website 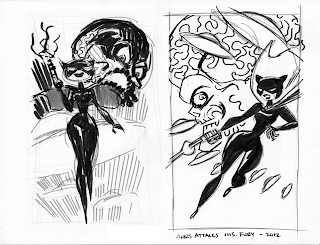 These are the rough drawings I submitted. I liked the giant Martian head on the top two, but also liked the idea of Miss Fury blowing up Martian saucers and parachuting elegantly back to her palatial estate. 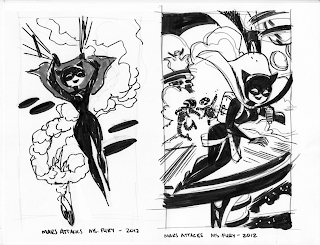 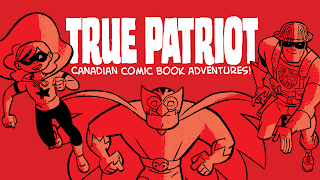 Hey everyone! If you follow me on Twitter or Facebook you might have heard that I'm part of a new anthology project called TRUE PATRIOT! Today our IndieGoGo campaign went live and we're offering up some wicked fun perks for donations. You can get copies of the book, postcards, desktop wallpapers and fancier stuff like a portfolio review with me!
Click any of the links above to find out about the project. And follow J.Torres at his blog and on Twitter (because he's masterminding this whole thing). 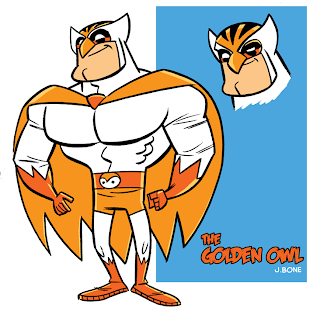 The Golden Owl is the character I'll be writing and drawing for the anthology. You may have seen him before in the pages of OWL magazine...I've given him a slight makeover for TRUE PATRIOT! He's gonna be kicking some Bigfoot butt!

Check out the IndieGoGo video. Feel free to comment any thoughts here or Tweet at any of the creators!