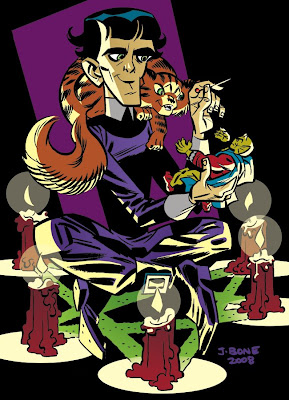 I hope that everyone had a wonderful holiday! To me it feels as though 2008 flew by. Last week was February, when I went to San Francisco with the Cookes and learned how to crochet (the two are, indeed, oddly linked). A few days later was summer and I rode my bike downtown for Wednesday Comic Book (aka Superman Club, aka Jimmy Olsen Club) lunch with the guys. Yesterday was Halloween and I dressed up like the Fly from the old Vincent Price movie. Mere hours ago Christmas came and went and now we're at the dawn of a new year. Incredible!
Next year I will pay closer attention to the passage of time. I'm quite convinced that my drawing table contains some kind of worm hole. Or perhaps it's the internet that steals away the days. Whatever the culprit I will find it out and slow the passage of time. This is my New Year's Resolution.
best,
j.
Posted by j. at 7:50 AM 4 comments:

Evolution vs. Creation of a Christmas Card!

Christmas is just around the corner. The first bit of snow and cold weather are a reminder to me that I haven't even started to think about my annual Christmas card yet. This year I managed to come up with an image pretty early on, sketched it out in a day and was finished by the following afternoon. 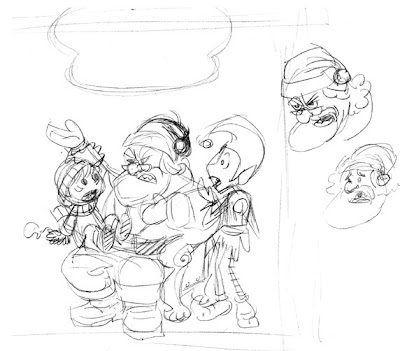 This first sketch had everything I wanted in it and would have been my card were it not for a distinct moment of clarity. I was working on another view of the same scene when a carol of bells rang loudly in my head. The bells said "BORING!" The bells were right. What a boring scene. Boring Santa. Boring kid. Boring everything. 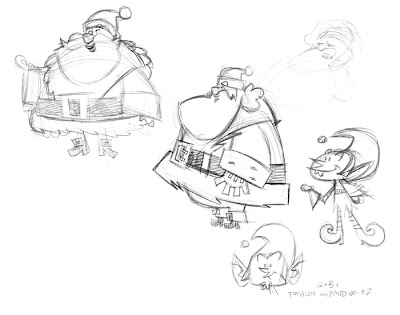 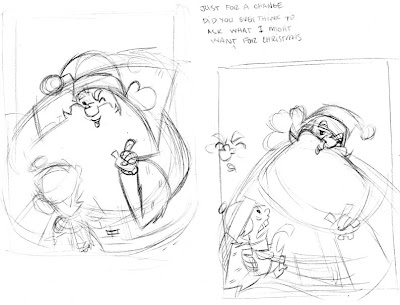 So I started sketching up a tighter shot. One with just the kid and a bigger, fatter, beardier Santa. I thought of all the talented cartoonists I know and how embarassed I'd be if I sent them the really boring card this Christmas. I thought about Christmas specials on TV and how the best ones have a distinct look. Santa in each show has a unique appearance. You'd never mistake the Rudolph Santa, for example, with the Santa from Nightmare Before Christmas. So I imagined what Santa would look like if I made a Christmas Special. 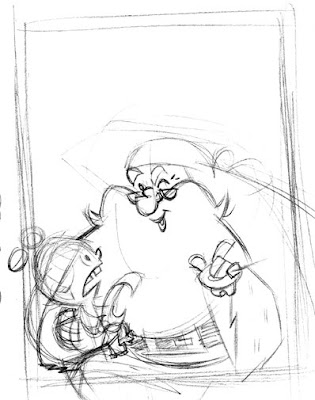 In my Christmas Special Santa is just a little bit weary of kids bringing him gigantic lists of things they simply MUST have. He's tired of them not saying "Please" and "Thank you" when he gives them a candy cane. He's tired of dry cleaning his beard to wash out the sticky stains from their grubby little chocolate covered fingers and wearing extra padding on his knee to soak up the pee from their urine soaked trousers.
He's especially tired of not being asked what he'd like for Christmas. Is it too unreasonable that someone might bring HIM a gift for a change.
And the little tot will cry, because he doesn't understand why Santa is being mean to him. The mothers in the line would glare at Santa and "tsk tsk" his rudeness, snatching their children away from the "worst Santa they've ever seen". One of them might even call Santa a nasty name. They might suggest he find another line of work, one that doesn't involve terrorizing children. They'll file complaints with the store manager, exaggerating the experience with suggestions of "alcohol on his breath" and "he called my son a snot-trough!"
Meanwhile, Santa (who just so happens to be the REAL Santa) will take off for Africa where he'll build houses for Habitat for Humanity and the people who live in those houses will share their food with him and thank him for all of his hard work and he'll be appreciated.
In my Christmas Special Santa might just call the whole thing off and leave the parents with the job of filling up stockings and putting presents under their trees. Maybe then they'll see what it was he did for them year after year. By the time they realize their mistake it'll be too late. 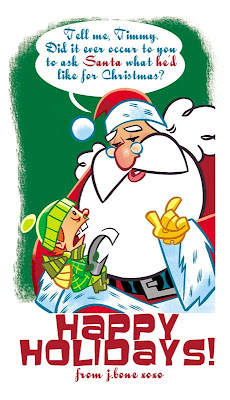 This is my first time drawing Astro Boy, though I've been a fan of his since I was a kid. I used to carefully watch each weeks episode so that when Astro reported his adventure at the end I'd be able to catch his one inaccuracy. Was it right for Astro to teach kids that it's all right to lie if you're just kidding around?
I had one small problem with the above image...I wasn't sure of the short form for "Kilograms". I wasn't even sure if that was a whole lot of weight! Did I drop high school math and science too early? Perhaps. But I obviously wasn't paying enough attention anyway. I know that One Million of anything is an awful lot. So one million kg's of electo-gravitic weight ought to be impressive.
I confess that I am embarassed by my ignorance. 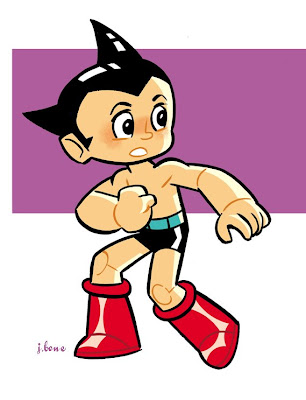 Here's Astro Boy being caught by surprise. Perhaps he just learned that I had to look up Metric weights on Wikipedia in order to complete the above drawing. I still use the old British system of weighing by Stone. I weigh exactly the same as one Chris Stone.
My good buddy Mike Cho pointed out that Astro looks a little like he's giving the finger. It's the way I simplified the fist with the first finger sticking out slightly. Mike's right, though. It does look a bit "bird-ish".

best,
j.bone
p.s. I have since educated myself further in matters of Metric. I am now better informed.
Posted by j. at 6:04 AM 10 comments: