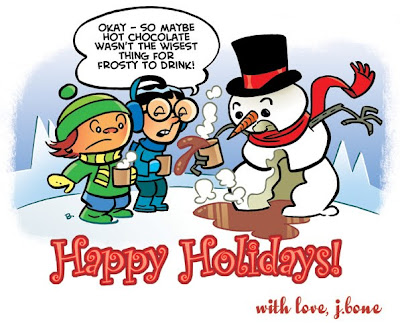 My annual Holiday card this year! The good thing for poor Frosty is that re-constructive surgery for him is quite inexpensive.

Have a great Holiday however you celebrate it!
j.
Posted by j. at 5:19 AM 7 comments: 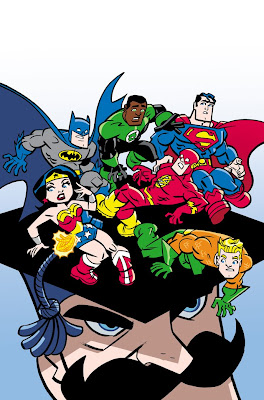 Super Friends #19 - The School of Evil led by a very cool moustachioed villain, the Headmaster Mind. I wanted the Friends in a bit of distress for a cover just to show that it's not always easy being a superhero. Little heroes with a giant villain is sort of a classic type of image used on comic book covers (and movie posters, novels, etc...) for ages. In fact, it's sort of like Egyptian art where the most important person (usually the king) is represented much larger than his subjects. 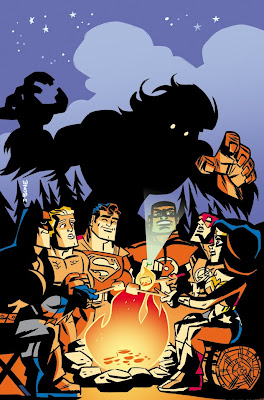 Super Friends #20 - How to make a scary cover without being too scary? Hopefully I was successful here. The Friends are generally happy with only Aquaman and the Flash showing any awareness of the threatening figure looming over the group. I like toasting marshmallows so that the outside is lightly browned while the middle becomes melty and gooey. Yum! 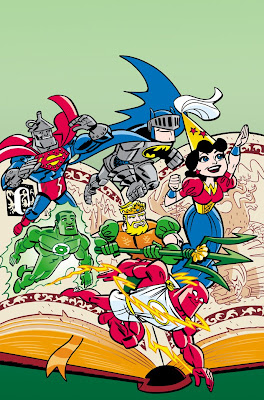 Super Friends #21 - The Super Friends visit the land of make believe and fairy tale! I wanted to do literal versions of their literary counterparts. Thus, Superman becomes the man of steel/Tinman, Batman is a dark Knight, Wonder Woman a princess (loosely based on the Disney Snow White dress), Aquaman is Neptune: King of the Sea, Green Lantern a ghostly man of light, and the Flash is Mercury (lightning fast Roman God seen in FTD's Logo). I love playing around with the hero costumes while keeping them recognizable and using their proper colors! 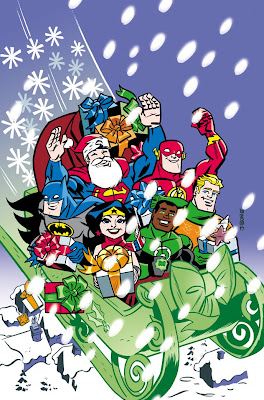 Super Friends #22 - The Holiday issue! The Friends play the part of Santa. Totally something they would do in real life! 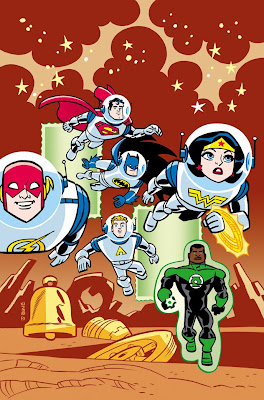 Super Friends #23 - I'm a big fan of old Science Fiction novel art. By old I mean artwork from the paperbacks printed in the 50's (mostly) with a few from the 60's and 70's. The books were usually re-prints of stories that appeared in pulp magazines with new, sometimes bizarrely abstract covers. The Super Friends head to space in this issue and I was influenced by those pulp novel covers in my drawing.