Last night I attended my very first session of Dr. Sketchy's Anti-Art School Toronto Chapter. I don't think we could have asked for a better model with miss Lena Love. She wore some incredible outfits and struck very striking poses! 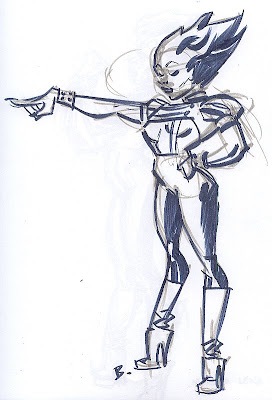 I wasn't paying attention during the intro to the first contest of the night...we were to Theme our drawing and this sketches theme was to be "Video Game Character". I just drew Lena as was and therefore did not win any contest. C'est la vie! 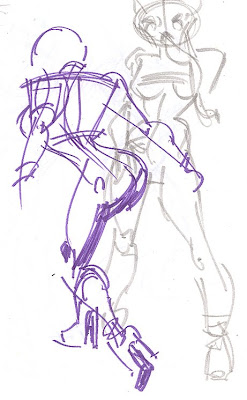 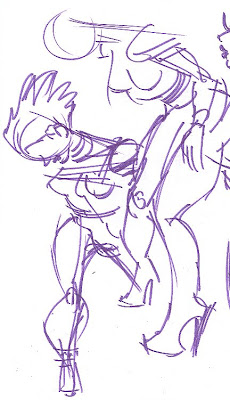 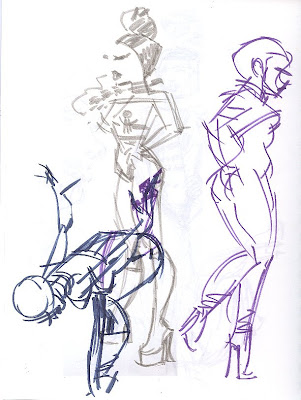 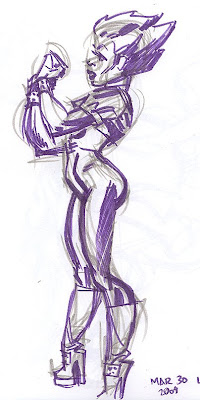 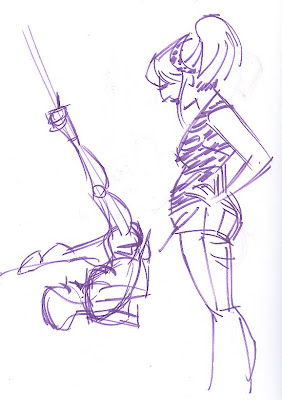 The girl in the pony tail is the photographer for the event. 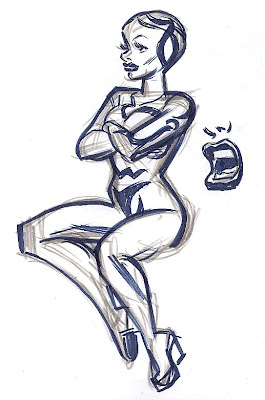 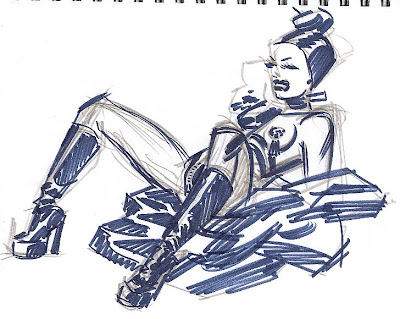 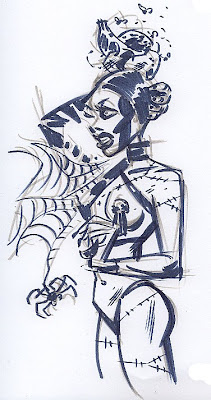 This time I incorporated the contest theme into my drawing...Lena wanted a Dark Carmen Miranda. Dead fruit and a cobweb shoulder ruffle weren't enough to rate. But who cares...I had fun. This sort of 'life drawing' is really all about the model as a personality and character. Usually the point of the exercise is anatomy and not (necessarily) likeness.

best,
j.
p.s. In case anyone missed it in the comments section...Uhura from the previous post was played by Coco Framboise! She's a local burlesque performer!
Posted by j. at 3:51 AM 7 comments: 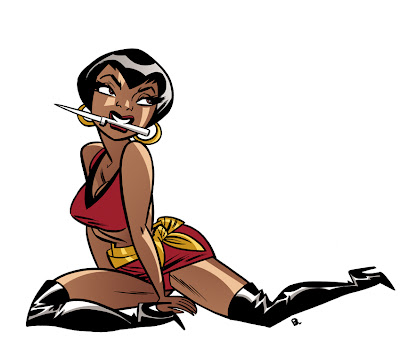 Yet another drawing based on that very same incredibly awesome night of Classic Star Trek themery from Dr.Sketchy's Anti-Art School Blog! I love the stunning beauty who portrayed Uhura! I've been going through the blog trying to find other pictures of her and discover her name. Hopefully she's a regular so I'll get a chance to draw her at a future session. 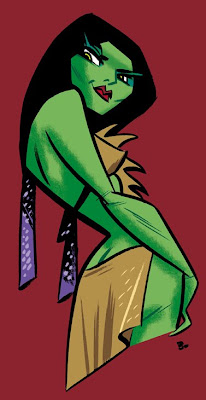 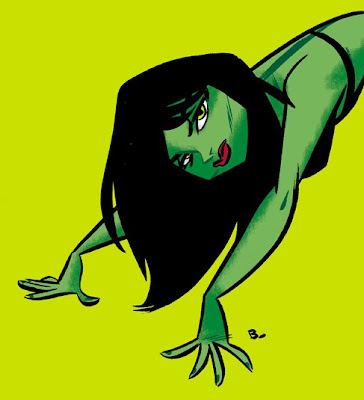 I recently learned about a fun life drawing program taking place at the Cameron House, here in Toronto. It's called Dr. Sketchy's Anti-Art School. The models for the sessions are costumed, themed or otherwise not your typical life drawing models. Star Trek was the theme for a recent "class" and I'm very pissed that I missed it. Check the link to the blog to see some fantastic photos of the event. The girl dressed as Uhura is gorgeous! I love the photo of her with the knife between her teeth. What a great pose!

On the subject of Grammar: in reading Dr. Sketchy's event title I question the placement of the word "anti". Is Dr. Sketchy against Art itself or just Art-School. If it's the latter wouldn't they be better called "Anti-School Art Class" or some variation of the same. Not that I'm an expert on language...I just read the name as Anti-Art, which is not what I think they mean. 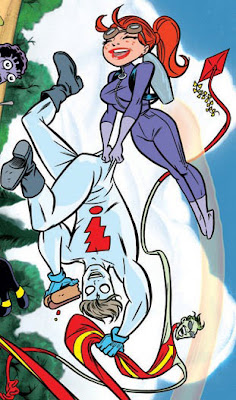 Gee whiz! I completely forgot that this was coming out this week! Madman #14 has a back-up story written by me, Drawn by Darwyn and colored by Laura Allred. I poke gentle fun at the ever-in-development Madman movie! I truly hope Mike gets to see his creation hit the big screen one day.
Y'know, when I first got into comics I used to buy just Spider-Man titles. I branched out occasionally to other titles if there was something about the art that I liked, but mainly I stayed with Marvel. Then a friend gave me an ashcan of Madman that had come in his copy of Heroes magazine (Heroes was a Wizard clone that didn't last). I loved the art. The story was kooky, so I didn't even know what to make of that...but the art and colors had me poring over that ashcan. I used to carry it around so I could flip through regularly. I was still inking with a marker back then...but I remember trying to figure out how this guy, Allred, got such thick lovely lines. With no other artists in my family I had no one to tell me that you could ink with a brush! I was not art savvy!

Anyway, years later, still collecting Madman, get published by ONI press and find out that Jamie S. Rich is good friends with the Allreds. Boy, was I ever nervous sending out that first e-mail to Mike. I think I may have even addressed it to Laura as a coloring question rather than babble on about my love of Madman and the Allreds.

I'm glad I did strike up a friendship with Mike and Laura. We teamed up back then for a Mr. Gum one-shot, I drew a Madman pin-up (which is re-printed in the back of Madman #14...and is, thankfully, relatively embarassment free art-wise) and then finally this latest issue...which I got to work on with my other great pal in the world, Darwyn.

Blah, blah, blah...enough nonsense from me. Check out the book and see if you can find the super secret hidden Scientology message. I'll give you no hints!