Queen of the Jungle! 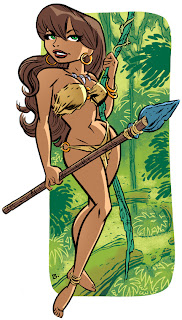 Cue jungle soundtrack...crickets the size of your hand create a pulsing background rhythm...exotic birds cry out...k-k-kaw k-k-kaw...the bass purr of a jungle cat sends a shiver up your spine...the Queen of the Jungle perches, her leonine hair remains remarkably unfrizzy despite the humid jungle air. What product is she using to maintain such body? Does she even own a hair dryer? Or know what a hair dryer is?!?

This one turned out better than I could have wanted! Could be that it's my sign and I really wanted an image that I wouldn't mind having on my wall! :) There is one part that still bugs me...and that is that her bosom looks uneven. I probably shouldn't even point that out because maybe no one would have noticed. But just in case someone does notice I want you all to know that I know.

Incidentally, I looked up some facts on Sheena, the original Queen of the Jungle...and I found out that she was the first female comic character to get her own title. She beat Wonder Woman by three months. I also love the fact that she was co-created by Will Eisner who also created the Spirit...the book on which I am currently working! 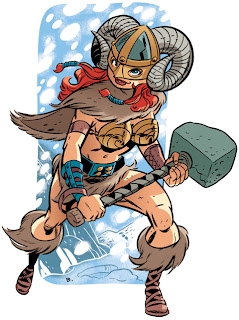 Boy oh boy, this one was tough. I drew a male version of this one first and wanted to use the same stalwart pose for the lady. But how to make a female warrior advancing with her hefty hammer into a sexy pin-up. Forgo the sexy, really. So I focused on making her a bosomy barbarian with shapely gams and sporting just a smidge of lipstick. She kinds reminds me of Sorsha from Willow! Maybe it's the snow.
j.
p.s. I love coincidence and in an example of sheer coincidence I was about to hit "Publish" this post when I heard on the radio an ad for a Dodge RAM! Zowie! I'd better hit post while the stars are still aligned!
Posted by j. at 9:15 AM 9 comments: 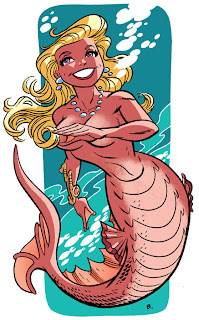 I suppose something should be said about the strangeness of this fish woman! Her tail is based on one of those old drawings of fish made before the invention of the camera. When sailors would come back with horrible tales of creatures beyond description which populated the seas and oceans of the world. It's the only time I've ever seen a shark drawn with whiskers. In the latin this little mermaid is known as ANTHRO POMORPHOS (or so says the book 1300 Real and Fanciful Animals from Seventeenth-Century Engravings by Matthaus Merian). 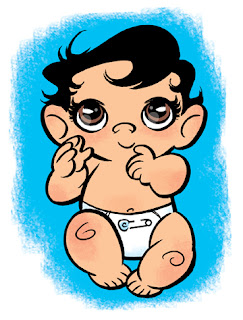 This week my good friends Chris and Angela delivered their first baby. I drew this little caricature of Junior Stone (not his real name) sight unseen. I took it upon myself to extrapolate the facial characteristics of the mother and father, merging the more prominent features into the likeness you see before you. In the end he looks nothing like this. More to the point I managed to completely forget that neither Chris nor Angela have brown eyes. Almost all babies have blue eyes at birth (or so I'm told) and only in the coming months will they learn his true eye colour. At any rate congratulations to my friends on their successful procreation.
your friend,
j. 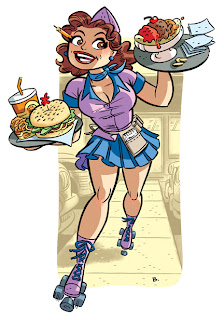 When I was a kid my hometown still had a drive-in A&W. I loved getting food served to us in the car! I don't know why that should be so awesome but it totally was. The girls who worked at the A&W weren't on roller skates but back in the 50's it was common...it sped up service in the then new fast food industry. Check out the book CAR HOPS AND CURB SERVICE by Jim Heimann for some fun history, if you're interested in that sort of thing.
This is entry number three in the continuing theme. I badly want to pun on the phrase "working for scale" but can't really figure out what the phrase means...and if it only applies to actors.
best,
j.
Posted by j. at 6:40 AM 10 comments: 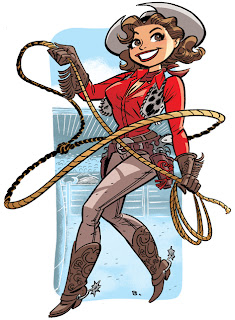 She's an old cow hand from the Rio Grande! Next in line, still continuing last post's theme. This little filly is practical, reliable, patient and affectionate. But she's also a little bit lazy and when pushed you'll find she's one stubborn lass. Seriously jealous she'll lassoe your a** if she catches you making time with another gal!
I always love drawing cow-folk...ever since working on Mutant Texas: Tales of Sheriff Ida Red (written by Mr. Paul Dini). When I look through that book I still think it's some of my best drawing ever. 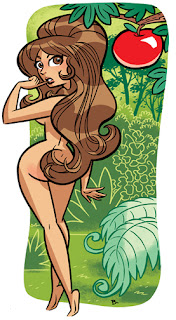 Shocking! Shameful! Disgraceful? Don't be silly. It's a drawing of the world's first woman, tastefully shielding her more private bits from leering eyes. Over the next few posts I'll be featuring pin-ups I drew as Christmas gifts for my family. This is Eve before the fall...I couldn't hide her nudity with leaves as did the classic painters because she is not yet ashamed. Y'see, she's still virginal here. That's an important key to the theme of this and the next few pin-ups. *wink*