In the Spirit of Giving!

Today's post is partially brought to you by the fabulous Cal Johnston owner of Strange Adventures in Halifax! It's also brought to you by the letter "S". "S is for Spirit", a character I've been inking over the brilliant Darwyn Cooke (who just Google searched his name and found this post :)
If you're ever in Halifax do yourself a favour and stop by Strange Adventures...Cal runs a shop the way I wish more businesses were run let alone comic book stores. Super nice, super helpful and he knows comics! I've done a few signings out at the store and have honestly never seen such a big turn out or encountered such friendly groups of people in my whole comic book career. On the first free comic book day Cal organized the handing out of free comics at the movie theatre which was then showing the very first Spider-Man movie. Is that not awesome?! 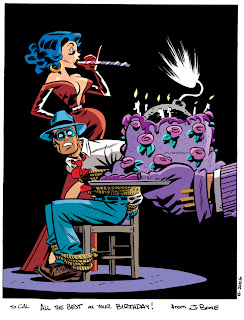 So, above is the drawing I did for Cal's birthday last year...which honestly doesn't begin to repay him for all the great things he's done for me. And below is a picture Cal sent me...a customer of his works with the UN and on a recent visit to Darfur took along a copy of the Spirit! Apparently the kids loved it so much they insisted on keeping the comic. 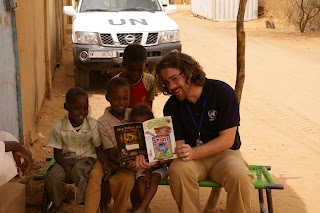 Doesn't this picture just make you happy? It makes me happy!
Have a happy day, ever'body!
best,
j.