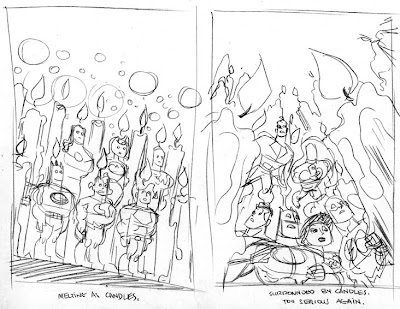 This week another issue of the SUPER FRIENDS hit the stands -- this is the big ol' Mad Scientist issue I mentioned previously! I've posted the sketches for and the cover to that issue already, so I thought I'd throw down some of the cover sketches that never made it to final. And to see the final covers all on one page you can check this page over at the Comic Vine
Above and below were some of my initial ideas for SF#10. The villain was Dr. Light. Not wanting to reveal him on the cover I played with light as a theme. I think it was just too gruesome to have the Super Friends as melting candles! What was I thinking? 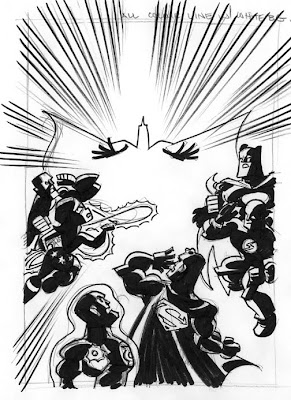 This would have been fun to draw up with the high contrast and blast of light but was, again, deemed too serious. 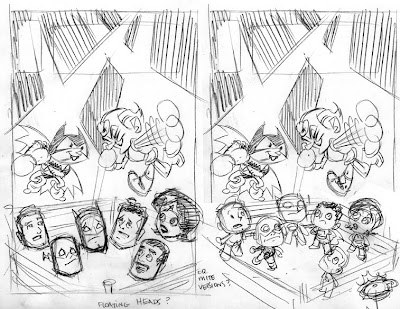 DING! Man, did I ever want to draw Bat-Mite and Mxyzptlk for the cover of SF#11. I toyed with floating Super Friend heads or them as Mini-Super Friends (I believe the kids call them "Chibis") In the end issue #11 was one of my favorite covers with all of the Superheroes wearing Batman-inspired costumes. 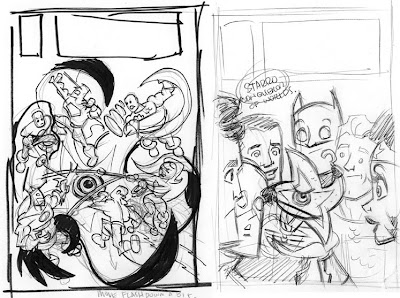 Pirate Starro was a brilliant idea dreamed up by Sholly Fisch. First out of the gate was a play on the old Justice League cover with the heroes taking down the mind-controlling starfish. Then starfish sized Starro adorably menacing with his hook and peg-leg. I think starfish are one of those creatures who can grow back limbs, no? Am I wrong? 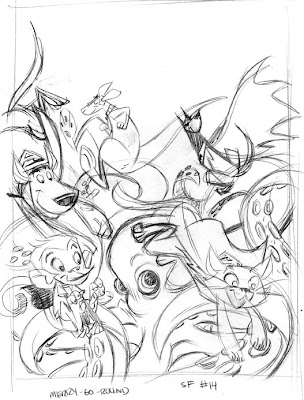 Ah, the Super Pets. Super Friends #14 was wicked fun to draw. I did quite a few drawings of the pets just because they were so much fun. The idea here was to have Topo as the center of an super-pet merry-go-round. Some of these covers should be revisited, I think, and maybe done up as final images! 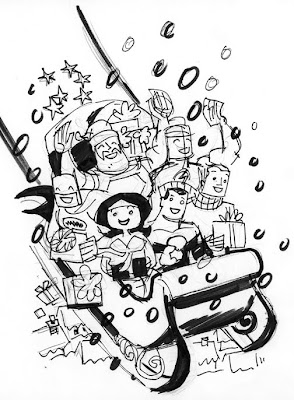 This is the actual rough for the Holiday issue from 2009 -- SF#22. Sometimes I know right away what I want to do with the cover. This was one of 'em. 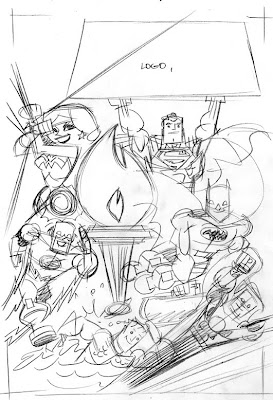 The Winter Olympics are about to start up here in Canada. They take place in Vancouver but for this issue of the Super Friends, #25, the setting is Space! I wanted a montage for this cover with the torch taking center stage. Each hero demonstrates his or her own athletic strength. In the end it's not only physical ability, but brains that win the day! 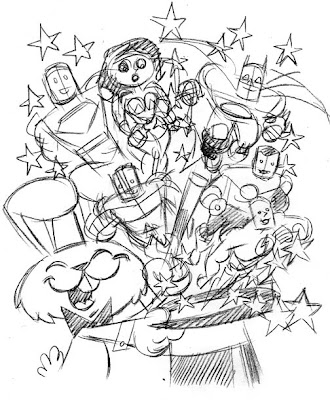 Another one that came out of the brain as a near final. I'm pretty sure the rabbit is inspired by the Pixar short "Presto" -- but also by the rolls of candy I used to get for Halloween, and sometimes Easter, as a kid. I can't remember the brand of candy but there was a bunny head on the wrapper that looked a lot like this fuzzy guy.

In other Super Friendly news, myself and Stewart McKenny were interviewed by Adam Dechanel over at his Superman Homepage. Now, I've put up some of Adam's reviews of my cover and interior work on the Super Friends which was not always the most positive. I'm not opposed to negative reviews in the least. They inspire me to work harder (after I dry my tears :) The thing with Adam's reviews were that they felt to me like he'd missed the intention of the book and especially what I think is Sholly's strength on the series -- that they are accessible to children but can also be enjoyed by adults who remember those ridiculous stories from DC days gone by.
So I was very happy that Adam asked me to take part in the four day Super Friends event currently up at his site. It gave me the chance to explain my thoughts on the book and get to know Adam a little better. Frankly his was the only site I could find reviewing the Super Friends and I was grateful for any attention given to the book! (Besides, the talented Stewart McKenny always made out well and as one of my favorite guys that was nice to see).

Here's my part of the interview.

It was a busy week for gabbing and I was also interviewed by J. Caleb Mozzocco at the Newsarama Blog. I tried not to repeat myself knowing that both Q&A's were coming out at roughly the same time. I swiped Caleb's pun for the heading of this post. ;)