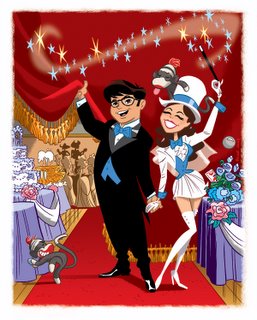 Okay...firstly this is the image used on Paul Dini's wedding invitation. His new wife, Misty, is a magician and her bride's gown is designed after her onstage costume (more or less). I love working with Paul and getting to do his wedding invite was such an honour.

The monkeys are Paul and Misty's "children" They even have their own website where they record their many misadventures.

Secondly, I got a G.D. virus on my computer only just last week. It's been wreaking havoc with my online business. I still don't trust my computer enough to check my e-mail (even with five different virus protectors running at the same time). I took the chance of logging in here but if my stuff suddenly disappears or you're invited to downloaded anything be warned...it's the virus talking.

Happy Holidays everyone! I wish I had a Christmas image to put up! 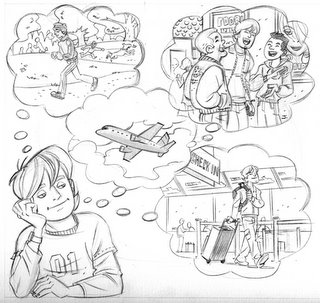 This, for the same company as what I done the Robin Hood image for, firmly establishes me as the guy who does thought balloons.

In the past I also did for them a kid daydreaming about waking up to a really loud alarm clock.

That grey tone on the air plane is a result of cheating. I plugged in a jpeg of an airplane and then "cartooned" over top of it. It's cheating...NOT copying. There's a difference, right?

If I'm allowed a moment of bragitude I really like the way the guy looks walking through the airport. It's such a jaunty walk!
Posted by j. at 6:24 AM 5 comments: 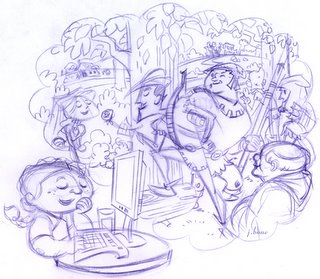 Been super busy at casa bone. Of which I am very glad, I must say. Today's little job is for a publisher of children's books. It's about a little girl and her creative writing assignment!

I've been checking out Steve Lambe's blog which is full of his wonderful design work. Guys like him and Jose Agreda make me want to work even harder to produce illustrations that have character and thoughtful design. I've still got a long way to go, baby!
Posted by j. at 3:05 PM 1 comment: 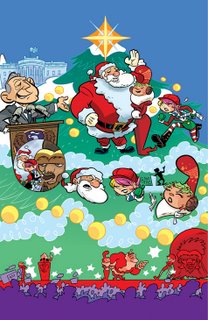 In late November 2005 Dark Horse releases another Jingle Belle adventure. This is the first page of my three page story, concocted by Paul (almost) especially for me! (We were gabbing on the phone when the story came to him.)

As you can maybe tell Santa and family are attending the annual White House tree lighting ceremony. I played around a little with Jing's standard outfit, with Paul's blessing. I think by this time she's well enough known that a simple costume change doesn't render her unrecognizable.

Also in the book is some terrific art by Jose Garibaldi and Stephanie Gladden.

Check this out for an incredible drawing by Stephanie (scroll down to the October 19th entry). Also on that page, Oct. 26th entry, is the drawing I did for Paul's wedding invite. He recently married the lovely and magical Misty! 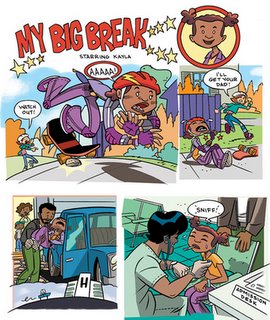 In this month's ChickaDEE Magazine (available at most fine book stores and a few crummy ones...and quite possibly only in Canada) there is a four page story by me (pencils), myself (inks) and I (colours).

It is the story of a little girl falling and breaking her arm. In the printed images there is accompanying text but I thought I might just put up the stuff I did!

This being a children's magazine I had to make sure the little girl was wearing all the suitable safety gear. I think it's kinda funny that even though she's wearing wrist guards and elbow pads she still manages to break her arm...what sort of lesson is that teaching the kids!

Anyway, it was lots of fun and I hope I can do more stuff for ChickaDEE! 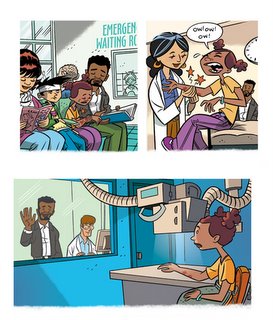 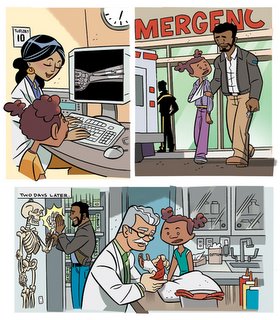 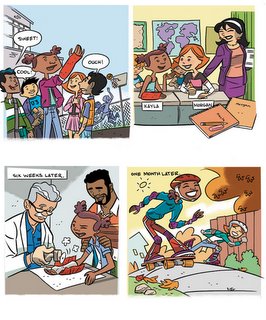 Terminator III was on television the other night and somewhere near the ending part of it is a big fight between Terminator I (Arnold Schwarzenegger) and Terminator III (Kristanna Loken). It takes place in a huge washroom with lots of smashing and breaking. At one point T-I picks up T-III and crashes her headfirst into a toilet bowl. It smashes all over the place. She hops back up and drags T-I through the wall and through a bunch of stalls or debris before smashing him into some ceramic tiles.

The whole scene is played with stern faces on the part of the actors...because they’re robots. It’s also played entirely for laughs. That alone makes it clear the film is not directed by the humourless* James Cameron.

I changed the channel and watched some other stuff and then came back to Terminator III in time to see a big helicopter smash through a wall where another helicopter had already smashed through. The first copter delivered the T-III and the second T-I. She, T-III, is smushed by the crashing copter and T-I delivers the deliciously witty line "I’m back."

Then I fell asleep.

Now that I’m awake I really think someone needs to make a Terminator IV. Here’s the pitch: It’s a comedy! The movie is set in whatever year John Connor, the son of Sarah Connor (Leslie Hamilton Gearran), would be eight or nine. He’s in public school. A Terminator machine(Ben Stiller) is sent back in time not to kill John but to kill his all his teachers, especially his Science Teacher (Eugene Levy). After so many failures the guys who keep sending back Terminators have realized that targetting John is a losing prospect. Instead they’re going after the teachers responsible for educating John in his sciences and maths figuring that a kid with failing grades could never become the leader of anything.

To protect John the good guys from the future have sent an audio message to Sarah (sending people is expensive and, as they’ve also learned, ends up in pregnancy which equals PARADOX!). The message strongly advises Sarah to hire a body guard, which she does (Arnold Schwarzenegger, reprising his kindergarten cop character now retired and hiring himself out to parties as a doorman/bouncer). John Kimble, body guard, poses as a substitute art teacher at John Connor’s school and hilarity ensues.

As this is a comedy there should probably be a few love interests for both the body guard and the little kid. And also the Terminator because a robot experiencing love is always hilarious.

If you, yes you, are a Hollywood agent and know how to get hold of people who make scripts (and dreams) a reality then please feel free to give me a call. I’d be happy to develop my proposal into a Blockbuster film for you at only a fraction of whatever you pay Quentin Tarantino!

*That James Cameron is humourless is this Blogger’s opinion and is not to be taken as fact. But I’m probably pretty close to being right.
Posted by j. at 4:20 PM 6 comments:

If these are at all recognizable then I should point out that these characters are copyright DC comics of Warner Bros. or something. 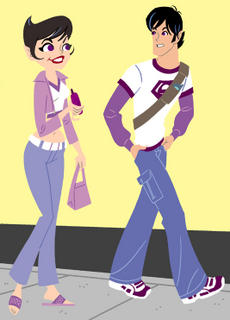 Done for fun...and maybe to scare up work. Apparently I scared work away!
Posted by j. at 11:23 AM 2 comments:

Dear Bloggery,
Today is the first day of the rest of my blog. I promise to visit you regularly, Bloggy, and fill you in on all the exciting things that happen to me and to other people who aren't me. Then one day, in the distant future, I will forget about you and all the wonderful times we shared together. But I'll come back to you and we'll catch up. I'll have done many wonderful things and had magical experiences all in which you took no part. Don't be bitter, dear Blog. My love for you withstands the passage of time. Remember me with fondness.
Until that time, Blog on...