Perhaps some of you know that Wonder Woman recently got a reboot...and a new costume. I suppose I'm fine with reboots. These things sometimes have to happen to bring a character up to date, refresh a dying franchise, tie in with a movie, or simply because creators don't know what else to do with the character (which is not entirely a bad thing).
Sometimes the new take on a character comes with a new costume (or sidekick, car, gender...) In this case Wonder Woman was given new duds by comic book Superstar Jim Lee. Now, I haven't read the Adventures of Wonder Woman since the Dodsons's run on the book so I can't say much about how this makeover came about -- but anyone who reads my blog semi-regularly knows that I have a special fondness for the Amazon Princess.

When the change was announced and image released I grumped a little, sure. But then I sat down and put ink to paper and came up with a few little re-designs myself. This would be they: 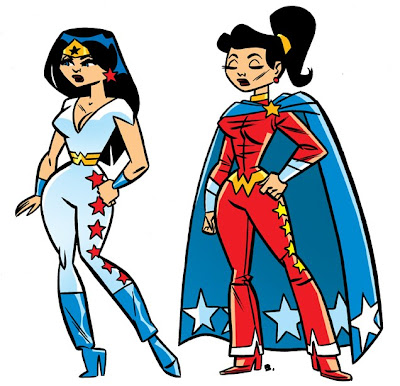 First up is a re-design of an old design I did based on Tura Satana's wicked outfit in Faster, Pussycat! Kill! Kill! It's also more than a little like Donna Troy's costume from the Teen Titans run by George Perez. I wonder if he was watching a Russ Meyer movie when he designed it.
The second is what I call the Evel Knievel! I imagine it's a total leather bodysuit with new lightweight Plastex™ gauntlets. Superman and Batman both have a cape and I think it's high time ol' WW had one too! 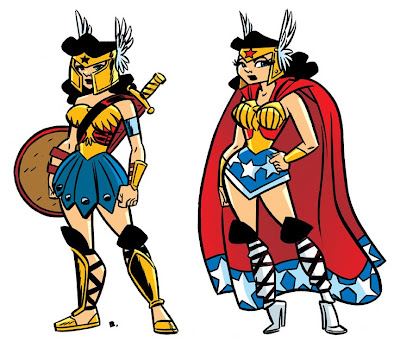 Third in the series is basically the Darwyn Cooke Amazon Warrior design from The New Frontier! When I drew the knee-guards I thought of Thor -- which led to design #4. This is Amazon Warrior by way of Norse God(dess). The boots need some work still but otherwise I think this one is my favourite. If I were to draw a comic book with the new adventures of the NEW Wonder Woman I'd probably go with this costume.
Ask me tomorrow and it'll be something completely different :) 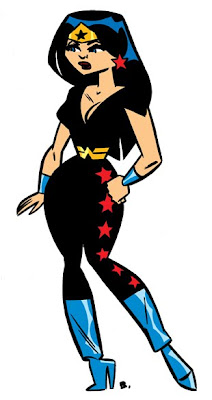 #5 is basically a black version of #1. It's how I initially planned to color the costume but went white (Virginal) because Wonder Woman just doesn't seem like the type of hero made cooler by putting her in black. But that's just me. I also wouldn't put her in the Black Canary's jacket but that's also just me. :)