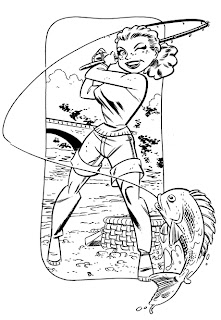 I know, I know...it's been ages since I updated. It was bound to happen sooner or later. Mostly I got tied up with work. The other big reason was that I didn't want to post any drawings that weren't related to the Horoscope theme until I was done with the Horoscope theme. Unfortunately the final few Zodiac drawings kept getting pushed to the side as more paying work came in.

Enough kvetching. Here, finally, is Pisces. The earlier fish woman was believed to be Pisces but she is actually Capricorn (the fish/goat or goat/fish depending on your preferrence). I've always known Pisces was going to be gal in hip waders fishing off a riverbank. When I was a kid we used to catch crayfish in cups in a river/creek pretty similar to what you see here.

Because I've been away for so long I felt it only right that I post a second image. I recently got the Art of Shane Glines which I highly recommend checking out if you can afford it. This drawing is more than heavily influenced by the gorgeous linework on display in Shane's book. The "S" curve on the front side of Selina's money bag is my little tribute to Shane's book (actually I've been throwing that line in a lot of my drawings lately). 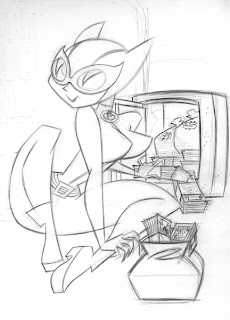 Love it all Mr. Bone. Such great work here. And, aren't we ALL inspired by Shane? I think every drawing I do these days is filtered through some Shane filter of some sort. It's a blessing and a curse, I guess.

Scott - Blessing and a curse indeed. I curse Shane for doing what he does so well and bless him for sharing it all with us! :)