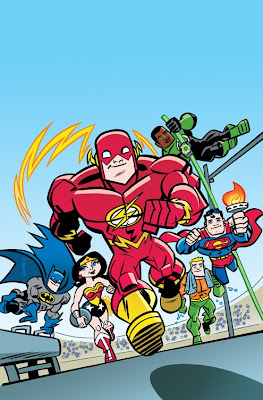 The Super Friends are kidnapped and forced to participate in a Galactic Olympics. Superman could easily win all the events, of course. But the Friends are all about teamwork. They even win the Olympics together! I can't remember why I featured Flash so prominently on this cover. I think I wanted a large foreground character. In retrospect it should have been Superman carrying the torch (but then Superman already had his feature cover on his Birthday). 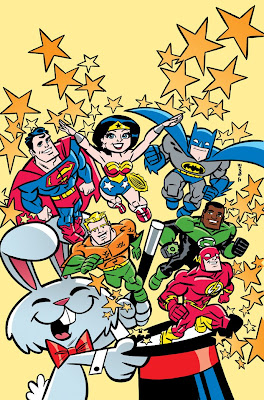 One of my own favorite covers. I wanted the bunny to look like the rabbit that appeared on candy wrappers I used to love as a kid (for the life of me I can't remember the name of the company -- but the candies were like 'rockets'. Rolls of candy wrapped in cellophane twisted at either end). AND he's also fashioned after the bunny from Pixar's brilliant PRESTO short film. 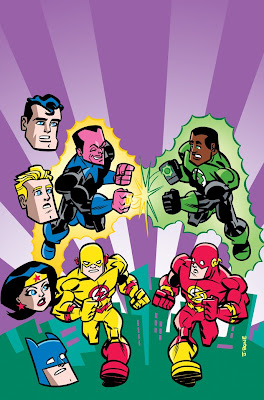 I drew the interiors for this issue as well as the cover (twice). My first final (below) just had sinister looking versions of the Flash and Green Lantern. My editor, the always delightful Rachel Gluckstern, asked me to change them to Sinestro and Reverse Flash. No argument from me! Drawing those guys was incredible fun! 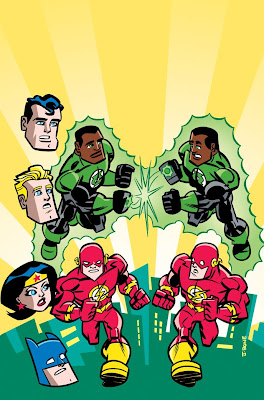 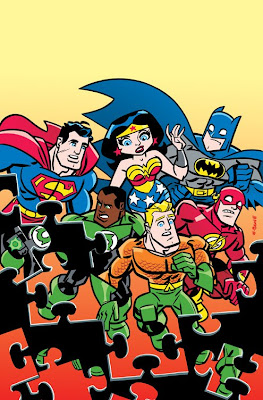 I love drawing these concept covers when I can. Usually the cover is more literal, though with the Super Friends anything is possible. Maybe they really do get flattened into a puzzle world which falls apart. I want to finish another of my rough sketches for this cover. I riffed on an M.C. Escher image placing the Super Friends in one of his multiple perspective/optical illusion rooms. Lot's of fun! 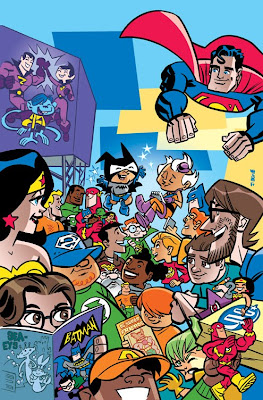 Oh, the chaos of a Comic Book Convention. This one is full of little Easter Eggs (of a sort). I FINALLY got to draw Batmite AND Mxyzptlk!! When Rachel told me they were the guest villains I just about burst! Awesome. I hid the other imps throughout the image, as well as myself, Rachel, and Stewart (the artist on the book). I couldn't find any photos of Dario Bruzuela (the other regular artist on the book) so, sadly, he isn't there.

DIg that puzzle one!

Michael - ALLAN! Yes, that's it! Thank you! I getting those candies at Halloween.

Thanks, Michael G, this wss driving me nuts... incidentally...
http://en.wikipedia.org/wiki/List_of_mascots

My little boy is four, and he just loves these comics! Keep up the great work!