It's My Element, Man!

Today I'm posting a few pencil drawings because I don't often do that (and I haven't had time to ink any of these yet :) I hope you don't mind. 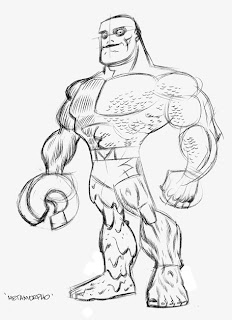 As I mentioned last post I've been drawing the covers for the upcoming Super Friends comic book aimed at a younger reader. The characters are based on the new toy line by Mattel. The toys are super cute! I've got Batman already and am eagerly awaiting the release of Aquaman. In a dream world the next batch of figures would include some of my favourite characters...Metamorpho, the Doom Patrol and the Metal Men. This sketch is my take on Metamorpho if he were to be one of these toys. His accessories would be a bunch of shape changing appendages that you would snap on.

Next up are some sketches of super gals. I was reading the Black Canary archive book and sketched her up in some down time. 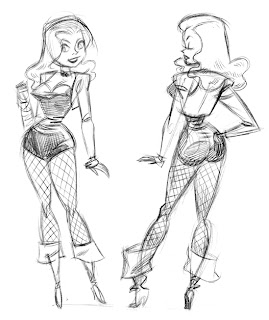 And, of course, you already know that I LOVE Wonder Woman. These sketches were my attempt to draw her as Diana Prince (I was also reading the Wonder Woman Showcase collection recently released by DC...boy is Steve Trevor ever a dink in those stories. He's all "Marry me, angel. Marry me. I won't be happy until you marry me, Wonder Woman." Yikes. What a bore.) 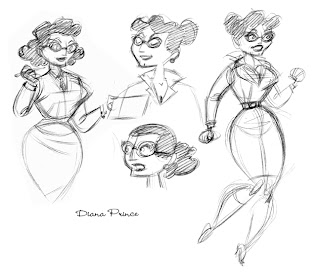 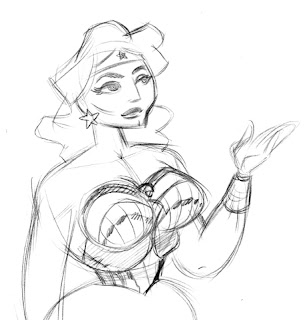 Thanks for stopping by. I'll try to have some finished art for my next post.
best,
j.

I would absolutely buy a Black Canary series with your art!

That's a really nice Black Canary. 1/2 the time I want to see an editorially mandated return to the Giffen-Maguire era costume just because the current costume is way too over the top. But your sketch shows just how well the fishnet approach works when done tastefully. There's a lot of artists out there who could (should) learn a lot from looking at this.

Nice Diana Prince too by the way. Even when trying to hide, WW's confidence comes through.

Finally, I really enjoyed last week's issue of the Spirit. It was a very satisfying conclusion to the El Morte storyline.

Johnny B - Much thanks, man. I should dig out the Black Canary art Cooke and I worked on way back when...in fact there's a fun splash page in there that I keep meaning to ink. By gum, I'll do that right now!

Alex P - Thanks, you flatterer you. Drawing Diana is kinda hard...I follow Darwyn's lead in that she's actually taller than Superman. So when you draw her as Diana the secretary I just can't picture her slumping her shoulders and "shrinking" herself ala Clark Kent.

I should ask Darwyn how he would have handled the Diana Prince persona...

rough pencil art's the best, so no i don't mind!

your super heroine art is great

Man, that Black Canary is gorgeous!

I'd buy a lil' Metamorpho. Have you been reading the Metamorpho Year One series? It's pretty good!

And on the subject of Wonder Woman...I wonder why was she not included in the first wave of toys? Is she going to be in the comic at all? Are there any women?

Rachelle - Wonder Woman is definitely in the comic...which I'm sure means she'll be a toy if the line is successful. And, yeah, isn't it odd that in the first wave of toys they released a Lex Luthor instead of Wonder Woman? Wha'?!

And I have been reading the Metamorpho Year One and enjoying it.

this just in said...

Hey, thanks for the comments on my Jareth costume! I had a blast putting that whole mess together so it's cool that people got a laugh out of it.

As for your sketches here, they're very nice. I admire the sense of structure you build within each of your figures. And those Diana Prince designs are so librarian-fabulous. I dig the glasses. Your Wonder Woman looks so regal too.