The Creature from the Black Lagoon! 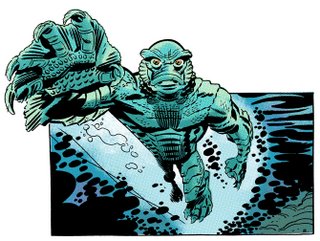 The Creature from the Black Lagoon is my favourite of the Universal Horror Monsters! The monster looks great! There's a terrific scene where Julie Adams is swimming and the creature is beneath her also swimming in an almost mirror image of her (if the mirror in question was a distorting mirror that turned you into an underwater creature of the opposite sex).

The movie was originally made to play in 3-D which is why the second image has that sort of off centre red behind the black out line. Watching an old 3-D movies without the glasses actually hurts the muscles of my eyes and makes me want to almost throw up. Please don't throw up when you look at my drawing of the Creature from the Black Lagoon!! 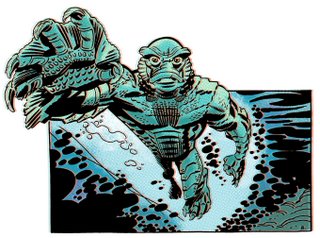 There are two sequels to the Creature from the Black Lagoon. Revenge of the Creature stars John Agar who was married to Shirley Temple for a while. There is also a lab scene with a young Clint Eastwood as a lab technician (Eastwood also appears in another movie by Creature director Jack Arnold...The Tarantula. Clint is the pilot at the very end of the film who blows up the mutant arachnid).

The Creature Walks Among Us isn't my favourite of the Creature movies but it does have some stuff I like. Scientists decide to operate on the Creature to make him more human which is one of my favourite sci-fi plots (I think it's sometimes called Pinnocchio syndrome...a conceit of man's that everyone and everything wants to be just like him). There's a real heartbreaking ending to the Creature Walks Among Us because of the arrogant scientific manipulation. And there's a well done plot about an abusive relationship between a married couple.

Check those movies out if you haven't already seen them.

p.s. Ben Chapman, who was in the Creature costume for land sequences in the first film, was at a Comic book and Sci-Fi/Horror convention here in town recently. I watched him signing some stuff but didn't meet him. I didn't really know what to say to him.

Love the inks on this, J.

Thanks, Uloo! Funny you should say so because I totally hated how I inked this. Except for his face. I don't think I thought enough about the stomache area before putting down the black.

I think it's time I checked your site for updates! Now THAT is some inking!!!

I didn't really know what to say to him.

"So... uh... remember that part in the Creature from the Black Lagoon where you're on land and you walk up to where those people are and you're like sneaking up so you scare them because they don't know you're there?"
"I... well, I suppose so."
"Yeah, that was awesome."

Ha! That would pretty much have been the extent of it, Jake. That and "Man, so like, were you really sweating in that costume? Because it looked like you'd be sweating?"

You know entirely too much B list celebrity trivia. The Creature From The Black Lagoon and Frankenstein's Monster are my favorite monsters. I really dig how you drew the creature. He's popping right out of the page, even without 3D glasses! Nice details on him too.

I think my eyes linger so long on the face and outstretched hand, I paid da belly no mind. No belly, no mind, no matter.

I found a coat today on the sidewalk at the corner of College and Bathurst, and a Superman pin on the lapel compelled me to pick it up.

Email me at 'jstewart.animator@gmail.com' if you'd like to have it back.

in terms of small-ish monsters, i'd say CFTBL is a favourite, and this is a fantastic likeness, and you are my hero! but as you know, godzilla is my boyfriend, so i like my monsters giant, with large fleshy thighs! found this site: http://www.giantmonstermovies.com/ which does a fine job or cataloguing all these studs! Helped me find Reptilicus which is the greatest Danish monster film I've ever seen! if any of them inspire you to draw, feel free!

hope you got your jacket back!

I did get my coat back thanks to good samaritan James.

And Zee, you can never know too much trivia. Frankly, it's all I know. Ask me to name all seven provinces and I won't get nearly half of them. My brain won't hold onto important information like that but it does retain nonsense like who played the Creature in all the underwater shots.

best,
j.
p.s. If anyone is still reading this I'm gonna get heck for the whole "seven provinces" thing. :)

this is awesome bone!
psst I know I shouldn't say this but its late
but you do better sea creatures than you do babies

This is incredible.
The Creature is my favorite too.

I keep forgetting it was originally made in 3-D - which explains why that claw reaching out featured so heavily.
I had a model of the creature well before I saw the movie and always thought it was cool... but when I finally did see it, and that claw appeared and the music went up several notches...
You've captured it perfectly here